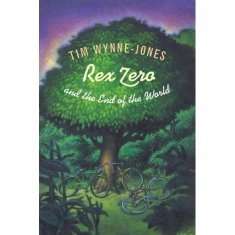 Tim Wynne-Jones’s Rex Zero and the End of the World is a quiet book that deserves to get noticed, and with 2 recent awards, it likely will be (2007 Boston Globe – Horn Book Award Honor Book, CLA Book Award 2007).

It’s summer 1962, and Rex Norton-Norton (Rex Zero to you) is a ten-year old kid who has just moved from Vancouver to Ottawa.  He has those typical new kid concerns – will he make friends? what will the new school be like? – and he has much bigger things on his mind – rumours of an escaped panther in the local park, the Russians, the Big One, backyard bomb shelters. The story traces the events of Rex’s first summer in the city, its lazy days underscored by the distant but ever-present possibility of nuclear disaster.  I love Rex’s voice, and the clever way Tim Wynne Jones has Rex say things that are hilarious in a completely unselfconscious way.  Rex’s family is charming and kooky: Cassiopeia – who craves sophistication, Annie Oakley – who builds a bomb shelter out of old Punch magazines, the dog Kincho who no one really wants, and the baby – “the Sausage.”

It’s hard to really describe what this book is about.  Part of what makes it feel rich and real is the fact that there isn’t one single thread of story that pulls you through the book.  Rex has a lot of questions, and worries big and small.  There are many things going on in his head and so the story drifts between the day-to-day workings of family life – car trips and meal time and watching tv, to the messiness of the outside world.  It’s a book that manages to be simple, but deep.

The book has an old-fashioned feel that belies its current relevance.  I imagine kids today feel most of the time that they’re getting just part of the picture when it comes to what’s going on in the world.  Rex faces different “unknowns” during his first summer in Ottawa, and figures out a few mysteries.  There are so many books out there for kids about “the summer that changed everything.”  It’s kind of a cliche.  What I like about this one is the fact that yes, this is a summer of change for Rex, but the changes are subtle, and of the kind that he probably won’t recognize or begin to understand until he’s much older.  This is a book that makes you wonder about who Rex will become, because you imagine he’ll turn into one cool teenager.

Rex Zero and the End of the World  is published by Groundwood, House of Anansi Press