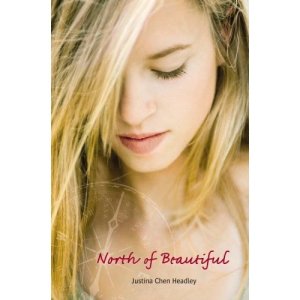 In North of Beautiful, Justina Chen Headley, readergirlz Diva, writer, and world traveler extraordinaire, has written another thought-provoking, thematically-rich YA novel, with a protagonist you won’t soon forget. Her first novel for teens, Nothing But the Truth (and a Few White Lies), was one of the very first YA titles I read as a grown up reader/reviewer, just as I was getting into this whole blogging thing. Let’s just say, it set the bar pretty high, and convinced me that teens today are pretty darn spoiled by the remarkable writing that’s happening right now, just for them. Since Nothing but the Truth, I’ve been waiting for EVER for the good ol’ Toronto Public Library to get it together and let me have a turn with Justina’s second book, Girl Overboard. Hopefully that will happen sometime before I hit middle age.

But back to North of Beautiful. If you’re the least bit into cartography, or geocaching, or art, or sexy Goth guys, or travel, or awesome family stories, North of Beautiful is your promised land. Terra Cooper could be beautiful. She’s tall, blond, has a great body and plenty of smarts. She could be beautiful if not for the large port-wine stain on her cheek. For years, Terra has hidden her birthmark under layers of makeup and her long hair, but everyone in her small town knows it’s there, and no one is more aware of her difference than Terra. She’s nearly through high school, and cannot wait to escape Colville and try out her own future at an East Coast art college. Terra isn’t convinced she’s an artist, just as she doesn’t believe she’s beautiful, so when her controlling cartographer father stamps out any hope of her leaving home, Terra feels more trapped than ever. Enter hot Goth Boy, Jacob. All of a sudden, Terra is headed on a journey she couldn’t have predicted. She has to trust herself, finding her way through new territory, within her family, her relationships, and all the way to the other side of the world and back.

I’m a sucker for a book that’s built around a central metaphor that the author carries through the text, refining and extending it right to the end until it’s all rich and delightful and worth pondering for a while. Justina Chen Headley does just that in North of Beautiful, taking the idea of life as a journey into unknown territory, and weaving into this notion concepts from cartography, adventuring and creativity. As an almost-adult, Terra is living through that uncomfortable period when she isn’t sure of who she is, or where she should go. And there’s no map for this, as everyone who’s grown up knows. Then there’s also the journey Terra’s been on since childhood, as she’s undergone many medical treatments hoping to “fix her face” for good. I think Justina offers readers a really complex look at the difficult, final stage of young adulthood, as experienced by a girl who’s almost ready to recognize her own strength. Terra learns that finding and defining her beauty is an interior journey that brings her a greater sense of calm, and also a thirst for what’s coming next. I love that lesson.

Read North of Beautiful with your gal pals. Read it in Mother/Daughter book clubs. Read it for a book report. There’s lots to talk about and to inspire. Then head over to www.geocaching.com and try a little treasure-hunting in your own backyard. And be sure to check out Justina’s current adventures with her family in Shanghai, over at her blog, Wordlings by Justina.

North of Beautiful is published by Little Brown and will be released in February 2009.