Today I am happy to present my interview with one of Kids Can Press’s new author/illustrators, Matt Hammill. Matt is one of three authors featured this week during Kids Can’s New Voices Blog Tour. Before we get to the interview, here’s the schedule for the rest of the tour. Check it out:

Tuesday, September 30th
Willow Dawson will be over at Good Comics for Kids talking about her illustrations for No Girls Allowed.

Wednesday, October 1st
Susan Hughes, author of No Girls Allowed, will be visiting with Kelly at Big A little a.

And now for the main event: 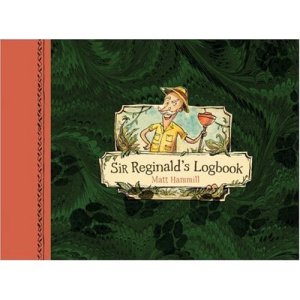 What tends to inspire you (situations / works of art / places / foods / people)?

More often than not I don’t know where an idea comes from; I just try to jot it down before I forget. But if someone asked me in an interview, hmm, I could say nature documentaries, old movie special effects, Lego, independent video games, and walking through forests at night. I get inspired by finding random brilliant artists online as well, although there’s something strange about clicking through someone’s entire body of work in sixty seconds.

Is your writing space a place of loveliness? Describe where you work.

When I was working on Sir Reginald’s Logbook my workspace was not particularly lovely—it was a small bedroom in a basement appartment I was renting for college. I’d write on my computer, and do the art on a very messy art table. It was usually dark by the time I’d get a chance to work on it, but I have this great white light lamp that lets me see what colours I’m painting with. I hate painting under yellow incandescent light—I can’t tell what I’m doing.
My workspace is a bit nicer now that I’ve moved into a place in Toronto. I don’t sleep right beside my art table any more so I don’t need to breath in so many paint fumes!

I imagine that publishing your first book has been quite the adventure, especially when you happen to have been “discovered” at your illustration program’s graduation show. Would you tell us about this experience? What was one aspect of the publishing process that proved to be an unexpected adventure?

At Sheridan College I studied illustration, and for one of my projects I decided to make a zine (that is, a small print run of photocopied, stapled books). I wrote and drew the first version of Sir Reginald’s Logbook, and printed about fifty copies to take to our program’s graduation show in Toronto. A couple of people from Kids Can Press (my editor Tara Walker, and Karen Powers, the designer of Sir Reginald’s Logbook) stopped by the show and saw my book, and they liked it enough to take a copy and pitch it to the publisher as something that could be made into a longer, full-colour, commercial children’s book. After many, many months of intermittent meetings and exploring how I could expand the book, I got a contract and we started work on the final version.

It was a bit funny, because I’d already sent in some other prototype books to Kids Can Press which were rejected, and I’d been planning to send Sir Reginald’s Logbook to them as well. Meeting them at the show did make it easier, however! One unexpected part of the publishing process was having to present the book at conferences—as an artist/writer, public speaking isn’t the most comfortable thing for me. But so far, I haven’t died.

What’s the best piece of writing / illustrating advice you’ve ever been given?

One of my art teachers, Clemente Botelho, made sure we all kept sketchbooks. And keeping up my sketchbook’s helped a lot, both as encouragement to draw and jot down ideas, and as a record of the work I’ve done. END_OF_DOCUMENT_TOKEN_TO_BE_REPLACED