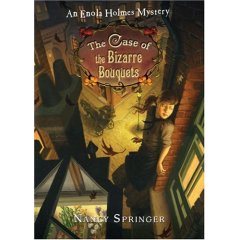 (Shhh… at this stage of the game I’m not really supposed to review titles that are under consideration for this year’s Cybils MG Fiction award (supposed to wait until the finalists are named since I’m a judge). I figure that reviewing Nancy Springer’s Enola Holmes: The Case of the Bizarre Bouquets is fair, however, since I have reviewed the first two in the series and I think it’s already pretty obvious that I love these books. So, onwards!)

If you don’t know Enola yet, I’m not sure whether to waggle my finger at you and tsk tsk, or to feel jealous that you’ve got such a treat in store. Don’t just sit there! Rush out and grab the first two books, The Case of the Missing Marquess and The Case of the Left-Handed Lady. Quick recap of major events so far: Enola is the much younger sister of Sherlock Holmes, and she’s every bit as brainy and bold and logical as her famous brother. After the disappearance of her mother in the first book, Enola’s brothers come to collect her and send her away to a finishing school to make her a proper young lady. Well, Enola will have none of that, so she runs off to London. Once there, she gets caught up in a mystery and proves that she is most definitely worthy of the name “Holmes.” In Book Two, Enola works on solving another mystery while doing all she can to evade Sherlock, who is bent upon locating his missing sister.

Which brings us to The Case of the Bizarre Bouquets. Dr. Watson has disappeared and Enola is on the case. She chooses to disguise herself as a beautiful young woman (thinking it impossible for Sherlock to imagine her as a beauty), and she pays a visit to Dr. Watson’s wife, to learn more of the circumstances of the doctor’s disappearance. While there, Enola notices a strange bouquet full of unusual and eerily symbolic blooms, denoting death and grief. Enola decides that the sender of the bouquet holds the key to Dr. Watson’s fate and so she makes it her single-minded purpose to discover the origin of the flowers. This investigation takes Enola deep into the seedier parts of London, and puts her detection skills and her courage to another serious test.

Just as the first two titles in this series were completely satisfying, so Springer does not let readers down here. Enola’s cleverness shines at every turn as she solves this mystery entirely on her own, using her knowledge of ciphers, flower symbolism and the art of disguise to piece together all of the clues and hunches and leads. It’s really Enola’s gumption, practicality and cleverness that lights up these stories and makes you want to read them all in one happy gulp. Alongside great characterization is a convincing setting and just enough historical detail that you feel you’ve stepped back into late 19th century London, with its bustle and mess and socioeconomic disparity.

Only one complaint – too short! I tore through this installment in a single day. Now I’m looking for the next adventure: The Case of the Peculiar Pink Fan. (Are you listening Santa?)