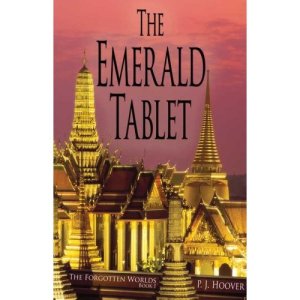 What do you get when you mix together five kids, 3 hidden keys, 2 secret continents and 1 summer camp experience like no other? P.J. Hoover’s debut MG fantasy, The Emerald Tablet. I finished this book yesterday, and it made me wish I had a whole list of ten-year olds to find Christmas presents for, because this book is going to make a lot of ten-year-old bookworms very, very happy.

Happy days indeed, because here’s a story (the first in a trilogy too!) for a kid who loves Harry Potter or Inkheart or the Percy Jackson books and thinks that after those series, there will be no other books that will ever be fun to read, ever again. This is where you become that kid’s hero, because The Emerald Tablet is all about kid power, magic power, evil power, telekenetic power, and the power of friendship. Fear not readers, that The Emerald Tablet is simply a rehashing of stuff we’ve already seen again and again. P.J. Hoover is a lady with oodles of creativity, and she puts a spin on the classic kid fantasy / adventure story that is fresh and engaging.

For starters, our young heroes have extraordinary abilities (it’s not all about wands and spells and broomsticks this time people). These kids are “telegens,” which means they are telepathic and have telekinetic powers and a bunch of other amazing skills too. The story begins when Benjamin and his best friend Andy learn that they’ll be spending their summer vacation at a camp for telegens, which turns out to be located in Lemuria, a hidden, submerged continent. As if that alone wasn’t crazy enough, soon after Benjamin arrives in Lemuria, a mysterious stone known as The Emerald Tablet chooses Benjamin to be its champion, which means he has to, you know, save the world. The rest of the story follows Benjamin as he fulfills his destiny, with a little help from his talented telegen buddies. The adventure rips along, and the world P.J. Hoover creates convinces you and makes you curious all at once. One particular strength of the book is the gadgets that Hoover invents as part of the Lemurian world – the Kinetic Orb (“kind of like a Rubik’s Cube, but for smart people”), telemagnifiers (objects that increase the power and abilities of the wearer’s mind), and a Geodine (a globe the size of a golf ball that contains the entire history of the earth). Aside from the “wow… cool” factor of these creative inventions, they end up playing important roles in the kids’ quest. Hoover is good at plot – she hints at things just enough to make you curious, and to get your wheels turning, but you see how it all fits together in the end.

The Emerald Tablet is packed with kid appeal, and there’s more than enough story to make readers eager for the next installment in the trilogy. If you need any more incentive, here’s the book trailer:

The Emerald Tablet is published by Blooming Tree Press.

4 thoughts on “The Emerald Tablet”