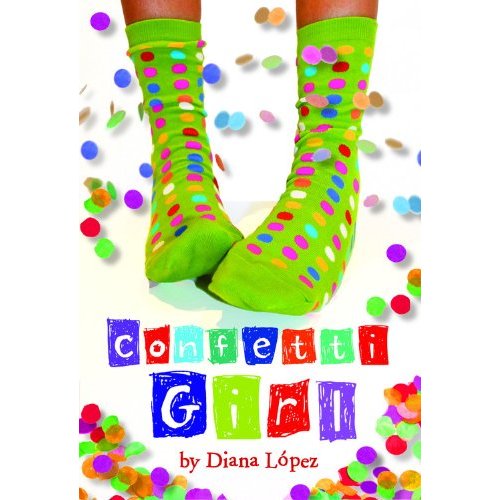 Apolonia “Lina” Flores is crazy about socks and science and sports. She’s got a great best friend, and a cute almost-first-boyfriend. Those are the good things. Mixed right up with the good are the things that make her life hard. Her mom died suddenly a year ago, and her English teacher dad is spending all of his time reading books, rather than being there the way Lina wants him to be. Confetti Girl, by Diana López, follows Lina as she navigates all of these challenges to discover how to adapt to change, and how to celebrate life no matter how messy it might sometimes be.

Lopez has created a sympathetic and realistic character in Lina. Her interests and her focus on friendship and her first crush make her come through as an ordinary and very believable kid. While the death of her mother is a significant background element to the story, it does not make the book heavy. Confetti Girl is not simply a book about a girl coping with the death of a parent. This is one strong element of the story, but there is a lot of humor here too, in the relationship between Lina and her best friend Vanessa, and especially in the scenes involving Vanessa’s mother, Ms Cantu, who is obsessed with making cascarones as a way of handling her recent divorce. (Cascarones are hollow chicken eggs, filled with confetti, decorated in festive colours, meant to be broken over people’s heads during parties and holidays). In fact, this book feels like a glimpse inside the house of a family that might live just down the street from you. You see everything – the good stuff and the damaged parts, the love and the frustration. It’s full of warmth and heart. The metaphor of the confetti, and the cascarones, fits the exuberance and confusion of Lina’s life, suggesting that to celebrate life means accepting that sometimes we can’t control everything, that everything is fragile, and from time to time things will get messy but sometimes that’s what makes the journey richer.

Confetti Girl by Diana López is published by Little Brown.