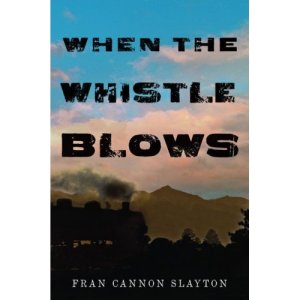 Fran Cannon Slayton’s debut, When the Whistle Blows, has garnered a lot of critical attention, earning praise all over the book world including starred reviews from Kirkus and School Library Journal. It’s one of those books that you read and can’t quite believe is the author’s first novel. It’s a beauty. You need to read it not just because everyone else loves it. Read it because this is a story that will sneak up on you and leave you with the feeling that you’ve just read something that has all the makings of a classic.

When the Whistle Blows is the story of Jimmy Cannon, who lives in Rowlesburg, West Virginia. It’s the 1940s and the railroad is the lifeblood of the town, and it is also Jimmy’s passion. He is crazy about steam trains, and he dreams of working on the railroad just like his dad, who is the Baltimore and Ohio foreman. Jimmy’s dad doesn’t want his son to choose this life, because he predicts that the new diesel technology will cut railroad jobs dramatically. Yet Jimmy doesn’t want to walk away from the future he has always imagined.  The railroad is a part of his family and his identity. Each chapter in the novel is set on All Hallows’ Eve (Jimmy’s father’s birthday), between the years 1943-1949, so we watch Jimmy grow up from age 12 to 18. We follow Jimmy as he orchestrates pranks with his buddies, when he sneaks a look inside his father’s secret society, on the day of his high school football Championship game, and one night when he has a close encounter with a train.

This novel is a marvelous snapshot of small town boyhood in the 1940s. Fran Cannon Slayton really makes you understand the railroad and its huge significance to the people of Rowlesburg. Even though this novel is set long ago, it has real resonance in the current economic climate as lots of people struggle with letting go of livelihoods that they’ve known for decades. Really, just as much as this is a tremendously believable and rich coming of age story, it’s about change in a larger sense too. The change of a community and an entire society. Jimmy’s dad tells him, “Change comes Jimmy. It’ll thunder down the tracks towards you like an engine with the brakes gone out. And sometimes, there ain’t a dagburn thing you can do to stop it.” Jimmy learns what it means to face change and to make choices about whether to stand up against it, or to adapt and keep moving.

Woven into all of this is Jimmy’s complex relationship his father. Jimmy desperately wants to figure his dad out, but it takes him a long time to even begin to get to the bottom of his father’s mysterious past. I enjoyed the structure of Slayton’s book a great deal. Each chapter felt a bit like a self-contained short story, but they built upon each other and the overall effect was a richer appreciation of the characters and the family relationships. You really do get to watch Jimmy grow up, from an adventurous prankster / dreamer, into a young man who confronts loss and uncertainty for the first time. There’s romance, but it’s not of the lovey-dovey variety. It’s the romance of the railroad. You’ll feel it.

In When the Whistle Blows, there’s rule-breaking and humor, loss and family secrets, all explored and mingled together with such deftness and clean writing that readers will certainly recognize Fran Cannon Slayton as a new writer to watch.

When the Whistle Blows is published by Philomel, a division of Penguin Young Readers Group.