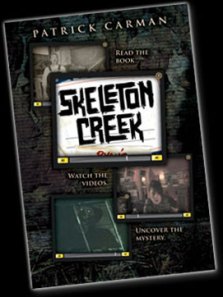 Two years ago I would have rolled my eyes if someone had put Patrick Carman’s Skeleton Creek in my hands. The “multi-media” content (that is, videos and text combined) would have made me an instant skeptic. I probably would have labeled it as gimmicky and shelved it without a moment’s pause. Now that I am much more technologically enlightened, only a tiny bit of skepticism lurked as I started reading (watching?) this book a few days back. I was actually pretty excited to see how the video / text concept worked out. All it took was one video installment and I was hooked. Kind of made me wonder if even the purest, most traditional bookworm can’t be seduced by a little film.

Privacy is a religion in Skeleton Creek. For Ryan McCray and his best friend Sarah Fincher, it’s always felt like everyone in town had secrets. For instance, why was their town’s name changed to Skeleton Creek and why is there a secret society known as The Crossbones? In the past, the town was connected to the now bankrupt New York Gold and Silver Company and the teens are certain that an abandoned dredge, once used to mine gold, is at the center of the mystery they feel permeating the Creek. So they investigate the dredge one night and an accident leaves Ryan with a serious broken leg and also results in both of their sets of parents forbidding the two to see or communicate with each other for good. But neither of them can forget what they saw, or think they saw, that night. Ryan writes all that he remembers in his journal and Sarah continues to stay in touch with him through vlogs that she sends to him, which include footage of their night at the dredge and other film that she takes as she continues looking for answers. As the friends get closer to some kind of truth, they have to ask themselves, should they return to the dredge and face what they think is inside, or stop asking the questions that might lead to the worst kind of accident imaginable?

So, the big question is whether or not the video/text format works. On the whole, I’d say it does. You’ll wait more than 20 pages before the first video installment, and I’ll admit that I was itching to get there. In fact, I think the whole package could have easily handled more video without seeming to cross the line into more film / less book territory. The videos themselves are relatively simple, much of the action taking place either in Sarah’s room or in the woods and the dredge. Of course, the clips set in the forest around the dredge do a whole lot to add to the fright factor, the handheld camera style reminiscent of Blair Witch, with the same breathless narration happening throughout. It was, in a word, fun.

But just in case you wonder how the text holds up, I was impressed. Patrick Carman has created a compelling voice for Ryan, who happens to be a gifted writer. Ryan writes in order to make what has happened to him feel more like fiction. The text turns out to be just as moody and creepy as the film. Here’s a taste:

There was no nurse or doctor or chalky smell this morning, only the early train crawling through town to wake me at half past five. But in my waking mind, it wasn’t a train I heard. It was something more menacing, trying to sneak past in the early dawn, glancing down the dead-end streets, hunting.

Is it spooky? Yep, though I think it would be spookier still at night (I read/watched on a blue sky perfect day and I was still pretty freaked out in places). The acting in the videos is so-so, but mostly decent. Sarah’s character comes off quite convincingly, it’s the guy who plays the forest ranger who’s a tad on the cheesy side. Take a peek at the trailer:

Thank me for reviewing this so close to the release of Book #2, Ghost in the Machine, in October, because Skeleton Creek ends with a cliffhanger to beat all cliffhangers. By the end, you’ll rethink reading in the 21st century, if you haven’t already – oh, and you won’t be heading into any abandoned buildings in the dark anytime soon.

Skeleton Creek is published by Scholastic.