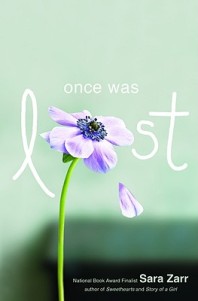 It is my absolute pleasure to be hosting Sara Zarr today for a second interview at Shelf Elf, this time to chat about her latest YA novel, Once Was Lost. Welcome Sara!

If you had to sell Once Was Lost in a sentence, what would be your teaser?

Thank God I don’t have to sell books on one sentence, because I’m terrible at this, but:
When a local tragedy overlaps with a series of personal tragedies in the life of a pastor’s daughter, she begins to question everything she was once sure of.

I’d like to know more about the origin of the title, Once Was Lost. How did you come to choose this phrase from Amazing Grace for the title and in what ways do you think it resonates with the book as a whole?

There was actually quite a little scramble to get a title in time for the book to go in my publisher’s catalog. I think we had two or three days to settle on it. My working title had been Home Enough, from the line, “I’m home enough to know I’m lost,” from a Jars of Clay song. It didn’t really work as a title, ultimately. I put the word out to almost everyone I know to help me title this thing. I talked about heat, home, desert, resurrection, broken things, missing people, mystery, youth group, family. I mentioned that I’d thought maybe there could be a line from a hymn that would work. There were hours of brainstorming, and brainstorming always involves blurting out some good-but-wrong-for-this-book and also, shall we say, less than perfect ideas. Some of the more amusing (to me) rejected titles: The Good Samara, Home Is Where the Hurt Is, On the Blink, Story of Another Girl.

About 45 seconds before I had to call my editor to really settle on something, my friend and writer Tara Altebrando emailed me the title Once Was Lost and it just immediately felt right. I think it felt right because 1) it’s poetic without being overwrought, 2) it’s from a fairly recognizable Christian hymn, which worked at the level of the story being narrated by a girl steeped in church culture, and 3) so many people in the book are lost—not just Jody, the missing girl, but Sam, her father, her mother, and all of the people trying to make sense of tragedy. It also implies the second part of the line, “but now am found,” and suggests that there might be some hope.

Sam is caught in a real period of turmoil in this story, and I think that a lot of teens will connect to her sense of being lost. She says, “This is different than doubt. This is something I’ve never felt before, a total absence of whatever it is that’s made me who I am, on the inside, all my life.” Do you think that this kind of crisis tends to fundamentally change who you are, or just bring you closer to who you’ve always been, your true self?

I think it can go either way, and I think it can happen at a number of different points during a life. We’re always going through this process of shedding things and picking up other things, and always changing. At least, that’s kind of how I see life and our job in life. We’re not made of stone, we’re never “finished,” and there’s always something to work on. Young adult fiction is so often about firsts—this just happens to be about one person’s first dark night of the soul.

You describe yourself as someone with “sincere but conflicted” religious faith. I wonder how much you identify with Sam, her questioning and doubt? Also, if you could give advice on faith to Sam at any point in your novel, what do you think would be the most important thing you’d want to say to her?

I identify with Sam a lot. I’ve definitely gone through periods of hopelessness and anger, when I’ve felt like I was shouting into the void and getting only silence in return, or coming up against the same brick wall over and over and nothing would give. I’ve been through other times when my faith has felt very real to me, and I’m sure of everything and have these moments of clarity and peace that are unexplainable. If I could give advice to Sam I guess I would say to rest. Life is hard, and there are all these things we wrestle with, and sometimes you just have to take a deep breath and say it’s okay that I don’t know these things for sure and if it hurts to beat my head against the wall looking for answers, then maybe I could give it a rest for awhile. Maybe I can kind of figure out a way to peacefully coexist with my doubts.

What are some of your favourite books / films / art / music on faith:

Oh, this is tough! Let’s say these are among my favorites, though I have many…
– Book: Flannery O’Connor, Mystery and Manners – Really about writing, but also includes some incredibly brilliant stuff on how writers can take a moral and theological view of what and how they write.
– Film: Whistle Down the Wind – Yorkshire children find an escaped convict in their barn and think he is Jesus—just a beautiful movie, and I’ve been waiting forever for it to come out in US format DVD.
– Music: Over the Rhine’s Drunkard’s Prayer CD
– Poem: The Second Death of Lazarus by Nicholas Samaras – This poem inspired a lot of the Lazarus-related thoughts that Sam has in the book. There’s this great line – “What do you do when your savior brings you back, only to leave himself?”
– Film: Shadowlands – When the boy goes looking in his stepfather CS Lewis’s wardrobe and finds himself hitting a solid wall instead of entering Narnia, that is one perfect picture of what a loss of faith looks like.

In a way, writing, or being an artist of any type, is a huge act of faith. There must be many moments of doubt and crisis and questioning. How do you keep faith as a writer?

It’s very similar to how I manage to keep my spiritual faith—I work on being okay with my doubt. When it comes to writing, that’s self-doubt. I work on being at peace with the feeling that I don’t know what I’m doing, and I do a lot of self-talk along the lines of, even if it is true that I don’t know what I’m doing, that I may fail, that I can’t predict how this will turn out or how readers will like it, I can still sit down and do this hour of work right now and trust that the experience will not be empty. And it never is empty, it always gives me something, so I keep coming back to that.

One of the most oft-quoted passages in the bible is 1 Corinthians 13:13, which ends, “So faith, hope, love remain, these three; but the greatest of these is love.” Your novel made me think of these lines. What do you think Sam would have to say about faith, hope and love, after what she went through in her story?

That there’s a reason faith is called faith—if we had proof it wouldn’t be faith. That hope is worthwhile. That love is messy but, like they say, it does cover a multitude of sins.

Did writing about faith, change anything about your own beliefs?

I don’t think it changed anything specific about my beliefs, because I’ve already been through so much of that process Sam goes through, myself, many times. But, writing always changes me in some way, and actually I think writing this story gave me more compassion for myself at a time when I was thinking that by now I should have worked some of this out, had some answers. I realized that I don’t necessarily needs answers. Like Sam, I just want to know I’m not alone.

Thanks so much Sara for inviting me to be a part of your blog tour!

Thank you for having me!

2 thoughts on “Author Interview: Sara Zarr & Once Was Lost”