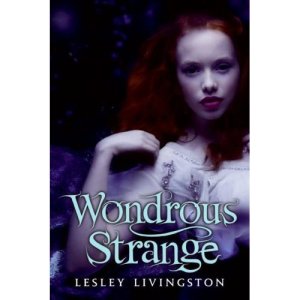 Lesley Livingston (actress, author and fellow Torontonian!) must have whooped for joy when she first saw the cover for her debut YA fantasy, Wondrous Strange. Doesn’t it look enchanting and mysterious and just the perfect shade of inky, dramatic blue? It was the cover that hooked me and made me want to read it as soon as I laid eyes on it last year. It’s taken me until now to get to it and in the meantime I’ve read quite a lot of YA fantasy, so I can say with confidence that Ms. Livingston has written a story that belongs right next to some of my favourites in the genre.

In lieu of a teaser by moi, here is the author, introducing her book:

First off, I’m with Lesley, Central Park is up there on my list of the most magical places I’ve ever visited. It seems made for stories. (Actually, I wonder why there aren’t more books for kids and teens featuring the park? Hmm…) The idea of it being a gateway between our world and the realm of faerie is perfection. It feels right. When I think about it, I think that Livingston could have brought more of the park into her story. Certainly it was key in the setting, but it stayed most of the time in the background. I didn’t feel it was evoked quite as strongly as it could have been. More park details and description please. I enjoyed the characters here. Kelley’s roommate, Tyff, was pretty hilarious, and Auberon and Mabh were strong and just a bit scary, as they should be. Lucky, the Lucky Charm eating , bath oil drinking kelpie was a hoot, and is definitely one of the strangest, sweetest enchanted creatures I’ve ever read. I liked the pacing of this novel. The author managed to craft scenes just the right length, not letting things lag for a moment. And there are a few well-placed twists too. Livingston proves that she can write humour, integrating it into her story here and there adding a lightness that set off the dramatic, darker elements nicely.

Danger, dark magic, drama, dashes of humour, and some kissing make for a book that will please lots of readers. Wondrous Strange is entirely satisfying, easy to sink into, and it’s absolutely much more cleverly conceived and crafted than many YA fantasy romances of the moment. The second title in the series, Darklight, has just been released. Both are published by Harper Trophy Canada.