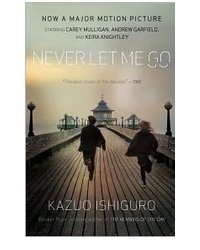 If I tell you that this is the first adult book I’ve read in months and it is also the best adult book I’ve read in a while, does that mean that you won’t take me seriously when I tell you I haven’t read an adult book that blew me away like this for a long time? Kazuo Ishiguro’s Never Let Me Go is one beautiful book. I know it’s not new, but the film just premiered at the Toronto International Film Festival, so it’s getting a second round of attention, and let me tell you, it deserves it.

I confess. I picked it up for the cover. (I would like to have a fall outfit in exactly the muted, rainy day shades of this book). I’m sort of a sucker for movie tie-in remakes of covers. I admit it. The story itself matches the mood of the cover to perfection. It’s quiet, understated and wistful, full of longing and atmosphere. It’s sad. It made me think. It pulled me in.

And it’s really hard to review without giving important plot points away. In the vaguest of terms, it’s about three friends who grew up at an elite school in the English countryside. The students at Hailsham have a special and terrible destiny, and much of the novel presents them as they begin to come to an awareness of what their futures hold. The rest is about what happens once they know. A big part of the brilliance of the work is how Ishiguro gives just hints of the devastating reality of the characters’ world. So when it is revealed, you had an idea of what was going to happen but it’s still awful to have it finally brought out into the open. The relationships between the three main characters are memorable and complicated.

I think it has crossover book written all over it. I’m sure teens will take a lot away from it, and it would be an ideal book club choice, because of the ethical questions it inspires.

Exquisite and affecting and highly recommended.

(P.S. Don’t watch the trailer for the film until you’ve read the book. It gives everything away in under 30 seconds).