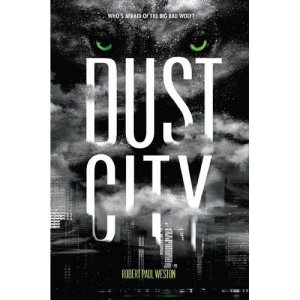 There have been a lot of urban fantasy novels published lately. It is possible that some readers may be just a teensy bit done with them for a while. I promise you that Dust City, by Robert Paul Weston, is special. I also promise that there are no werewolves in this book. Honest. You should read it, and not just because the cover is so awesome which will make you want to carry it around, facing out, as you walk down the street, stopping every so often to spend a little time staring into the spooky wolf eyes. You should read it because it is gripping, clever, richly imagined and thematically complex.

Henry Whelp isn’t just any wolf. His father is the wolf who killed Little Red Riding Hood and her Grandmother. It’s hard enough to be a wolf in Dust City to begin with, but it’s way harder when everyone expects you have murder in your blood, and they’re just waiting for you to lose it, like your dad. For a while, Henry has been keeping quiet in a Home for Wayward Wolves outside the city, but after a murder in the home he breaks out. He’s looking for answers. He wants to find out once and for all what really happened the night his father became a murderer, and he thinks it may have something to do with Dust, a mind-altering drug sold on the black-market in the city. He also hopes he might discover what happened to the fairies, who disappeared and took their powerful fairy dust with them, inspiring thaumaturgical companies to create an entire industry to provide synthetic dust to an increasingly addicted populace.

I will read just about any reworking of a fairy tale. Love ’em. I was extra excited about Dust City because Robert Paul Weston is uber-creative and accomplished. (His debut verse novel, Zorgamazoo was phenomenal and so much fun. Anyone who can write in iambic pentameter for close to 300 pages without a misstep is a rockstar in my books). The Big Bad Wolf is not the only fairy tale character who makes an appearance here. Henry’s best friend is Jack, a notorious thief with a bag of beans. The gutsy, ass-kicking detective on Henry’s tail is Inspector White, with cherry-red lips and skin white as snow. There are more clever surprises, but I’ll let you discover those yourself. I was prepared for dark, and it was.

Weston’s prose is the kind of work that makes you sure he has put thought into every word and sentence. As I read, there were many moments when I stopped and went back to enjoy his images and his turns of phrase. It’s tight writing that brings the fantasy world vividly to life. The novel as a whole moves at a brisk pace. It’s full of action and imagination, much like Weston’s first book. But what’s different is the grittiness. Much of the story takes place in the underworld of Dust City, quite literally, in tunnels beneath the city which runners use to ferry dust from the warehouse to addicts. There are scenes of violence and torture – nothing that is too much for the audience, but be forewarned. Weston explores the challenges that come when a society is full of all different types of citizens and communities, with different histories, cultures, and degrees of power. It makes for a rich and challenging reading experience which could inspire discussions around the drug trade, oppression, multiculturalism, and justice.

It is exciting and unusual when a writer produces two such unique and different books back-to-back. I can’t wait to see what Robert Paul Weston imagines next. You can hear him discussing the book on a podcast from the CBC. Take a listen here.

Dust City is published by Razorbill in the U.S. and by Penguin Canada in Canada.