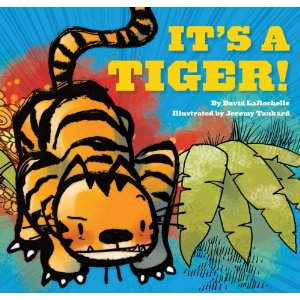 I’ve been excited about It’s a Tiger! by David LaRochelle, illustrated by Jeremy Tankard, since I had the chance to hear Jeremy read it to some lucky students when he visited the library this spring. So I’m able to confirm that this story is an absolute kid-pleaser. There was a whole lot of belly laughing going on. It is a book made for reading aloud, and I plan to do that over and over again with my primary grade classes this fall.

The concept is delightfully simple. An intrepid kid is exploring the jungle when he thinks he might see something strange swinging in the vines… “IT’S A TIGER!” So he does what comes naturally. He runs away. But then, when he decides to hide inside a cave, he thinks he might see something strange lurking in the shadows… “IT’S A TIGER!” You get the picture. On he goes, running away from and always running back into the tiger. It’s a goofy, kid focused, Indiana Jones-esque romp. Let me tell you, the tiger joke never gets old, quite the opposite in fact. Every time “A TIGER!” shows up in the text, the laughs get bigger. This makes the book a blast to read out loud.

And Jeremy Tankard’s artwork is dynamite. David LaRochelle must have done a happy dance when he was told that Jeremy would be illustrating the story. I couldn’t think of an artist whose style would be better suited to the energy and humour of this tale. I love how on every page Jeremy creates such a sense of movement, using the vines and bats and snakes and waves to make each picture full of life and interest. The kid is always in motion too, as he runs, dodges, jumps, and climbs. If you know anything about Jeremy’s artwork, you know that his colour palette is eye-popping, and that’s true here, as the colours mimic the story’s excitement. They’re loud, which works to perfection for such a raucous tale.

By the end of It’s a Tiger! I think you’ll feel a little breathless yourself, like you’ve been running away from something. It’s just that much fun to read. And I’m betting the first thing you’ll do when you’re done is take a deep breath and read it all over again.

It’s a Tiger! is published by Chronicle Books.