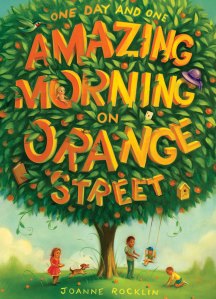 Joanne Rocklin’s One Day and One Amazing Morning on Orange Street is a just right sort of book for the end of summer. It’s not too long, but it makes you think. It’s a little melancholy and sweet and poetic. It’s about family, community, history, everyday magic, and how we’re connected in ways that we sometimes recognize, and in ways that we’ll never notice.  You’ll be able to read it in an afternoon. I’d say it would be perfect hammock reading.

The story begins when an orange pylon appears on the curb in front of the empty lot on Orange Street. The empty lot is where the big old Valencia orange tree grows, and has grown for many years. A little while later a stranger shows up, and nobody knows why, though everyone has ideas. The orange tree and the empty lot are at the center of many small mysteries that will be uncovered and resolved by the end of one eventful day. You’ll get to know all of the kids who live on Orange Street, and you’ll love how they seem to be ordinary and quirky all at once. Each chapter reveals a bit more about their worries and hopes and ideas.

I do wonder about readership. This book meanders, and the way that things come together at the end might appeal more to an adult’s sense of nostalgia than to kids’ desire for drama. I hope that it finds its way into the hands of the right readers, because I’m sure they’ll love it.

Here are a few other reviews to check out: Book Nut, Books 4 Your Kids, Pipedreaming.

One Day and One Amazing Morning on Orange Street is published by Amulet.

Just about the only downside I experienced through reading Holly Goldberg Sloan’s debut novel, I’ll Be There, is that I’ve been walking around since I’ve finished it with the Jackson 5 playing very quietly inside my head over, and over, and over. (And there are days when I like the Jackson 5. Just not everyday). I suppose it says something about how much I admire this book that I am willing to let the Jackson-5-a-thon go, and tell you that you’d be crazy not to get your hands on this outstanding story as fast as you can manage. It’s evocative, thematically-rich, exciting, and touching. It has characters you’ll remember for a long time. It’s what a book should be, but often isn’t.

Emily Bell is not a good singer. She knows it, but her father doesn’t seem to know it, or else because he’s a music professor he doesn’t want to believe it. Either way, he insists that she sings a solo in the church choir. But if he hadn’t insisted she might never have seen Sam, the strange guy at the very back of the church who was never there before. The fact that Emily sings, and that Sam witnesses her humiliation, and what he does after she runs out of the church – all of this is the beginning of their story. From this small moment which seems to be based so much on chance, these two are intertwined.

Throughout their lives, Sam and his little brother Riddle haven’t lived in one place for long. Their father is mentally unstable and he’s a thief, a combination that makes him frightening and difficult to oppose. After Sam and Emily fall for each other, it isn’t long before his father gets wind of it and sets events spinning towards danger for the boys and for Emily and her family.

Holly Goldberg Sloan has a lean writing style. There isn’t excess descriptive fluff anywhere really, and this gives the narrative a sense of urgency and immediacy from the start. There’s a taut feeling that makes you expect that some hard things are going to happen in the not-so-distant future. This makes compelling reading. I liked that for a story that was pretty close to a “love at first sight” scenario, you really do believe in Sam and Emily’s relationship from the very beginning. It’s hard for an author to convince the reader that there is something there that is strong enough to make that kind of connection natural and credible. Another impressive thing about the book is the way that the author creates these perfect little moments when a character does something small, but that is so significant and has such emotional power, that it brings the reader to a much richer understanding of the character’s inner life and motivation. I don’t want to give any of these moments away, but she did a particularly good job characterizing Riddle this way. He is a hugely memorable character. The only character who feels a little off is Bobby, the guy who falls for Emily and tries in his bumbling way, to win her. He seemed a little too close to a caricature, and for a novel as intense and as sad in places as this one, it didn’t feel right to have someone who bordered on clownish feature so prominently in the story. At times, it upset the tone.

I’ll Be There is part survival story, part romance, part family drama. It’ll make you think about how a little choice might have the power to change your whole life, and that sometimes we’re connected in ways that we will never even see. It is one of my best reads of this summer.

I’ll Be There is published by Little, Brown.

(This post is cross posted at Guys Lit Wire).

I’ll Be There by Holly Goldberg Sloan

I’m telling you, this book is really something. It’s kind of woken me up from a string of “meh, this is pretty good” books I’ve read lately. The number of times I’ve stopped reading for a second and noticed that I had goosebumps is clearly proof that this story is special. I cannot wait to finish it and I don’t want to ever finish it. It will be a tough act to follow.

The book trailer and behind the scenes video for Miss Peregrine’s Home for Peculiar Children. My friend Vikki showed them to me the other day and wow. Wow. That is all. 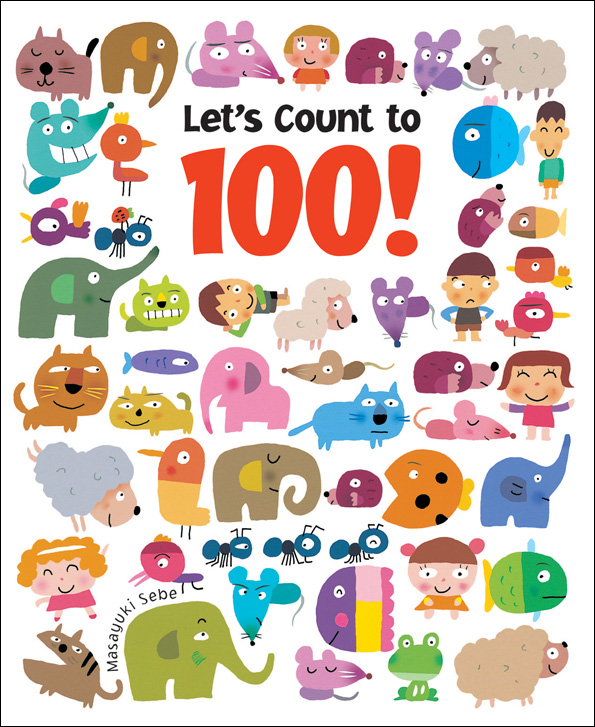 Fact: the world contains many counting books. Fact: not many of these counting books are as adorable and distinctive and clever and funny as Masayuki Sebe’s Let’s Count to 100! The title has an exclamation point, and as soon as you take a look inside, it’s clear why. This book is FUN! It makes counting to 100 about as entertaining as it could possibly be. I read every page because I was actually having a good time doing it.

Here’s what’s delightful about this colourful and expressive book. Each page opens to a double-page spread packed with detail in all sorts of vibrant colours. The reader is invited to count the tiny mice, cats, moles, sheep and more, and the text asks questions that guide young readers to do more than count to 100. For example, on the page full of kids, young readers are asked to search the pictures to find out how many children are doing handstands, who has candy, and who likes to play soccer. There are search-and-find games on each page, which adds to the fun. On top of this, the illustrations have plenty of sass and character, lots of cute little dramas are unfolding all over the place, which I think kids and parents will have fun spotting together. It’s a counting book that will likely become a favourite to read again and again because of the level of detail, the silliness, and the bright personality-filled cartoon illustrations.

Let’s Count to 100! is published in Canada by Kids Can Press.

A new Ally Carter book is news that is sure to put me in a good mood. Uncommon Criminals is the next in the series that began with the oh-so-clever Heist Society. I showed uncommon restraint in not rushing to the cash register to buy this one as soon as I saw it in the bookstore, instead opting for the always patience-testing exercise of putting it on hold at the Toronto Public Library. I think I was 65 out of 66 in line for it, so I sighed and tried to forget I’d even seen it. Then, of course, it showed up for me the day before I left for Paris. I considered taking it along, even though that would have broken my no-hardcovers-in-carry-on rule. So I left it behind. It was pretty nice to come home to, I tell you.

If you’re reading Ally Carter, then you know you’re in for funny, great plotting, clever characters, and twists. Really, you could sum it up in three words: So. Much. Fun. Ally Carter’s books are the sort of books that as soon as I start reading, I could be tempted to stick a post-it on my forehead that says I CAN’T TALK TO YOU RIGHT NOW… READING.

After her incredible heist at the greatest museum in the world, Katarina (Kat) Bishop is back for some more criminal-ish behaviour. This time her sights are set on the Cleopatra Emerald, an infamous jewel that is notoriously difficult to nab, and also happens to be cursed. Kat and her crew hope to chase down the emerald and return it to its rightful owner, which would be simple for such gifted thieves if only they weren’t playing against some pretty tricky con artists. Is Kat in over her head? Definitely. But she isn’t about to let that stop her.

I enjoyed this book even more than the first, probably because from the beginning of this one, the situation Kat faces seems even more impossible than what she was up against in the first book. You can’t believe that she will find a way to come out on top, which jacks up the tension. Carter builds on the theme she began exploring in book one around whether or not there is ever a justification for theft. Can there ever be such thing as a good thief? All of the different cons that get introduced and explained in this book are fun, and you still get a lot of the great heist-planning details that were there in book one. I liked that Carter didn’t let the budding romance between Hale and Kat take over. It makes Kat a lot more interesting that she’s thinking about more than just kissing. After all, she has some pretty big things on her mind. She’s one cool… Kat. (Couldn’t resist, sorry!)

Big news for the first book: Heist Society is set to become a film produced by Drew Barrymore. No surprise there really. Another reason I love both of these books is that Carter’s writing really encourages you to see it all in your head as you read. It should translate well to the screen I imagine.

Uncommon Criminals is pure fun and you’d be nuts to pass it up. It is published by Disney Hyperion.

He was hanging out at the Musée des Arts decoratifs.

Paddington was just one of so many unexpected and wonderful finds on our honeymoon. We’re back in town, and I’m ready to elf again.  Even though I’m missing this: 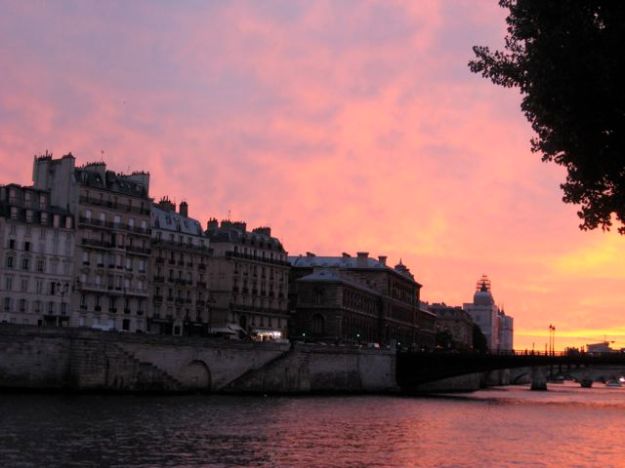