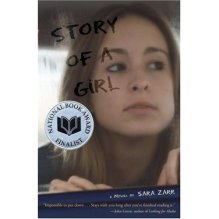 Sara Zarr’s Story of a Girl is one that I’ve been meaning to read for some time, and my upcoming interview with Sara finally pushed it to the top of the pile. If, like me, you haven’t made it to this jewel, you’re in for something good. And then you’ll be all caught up when Sarah’s new YA novel, Sweethearts, comes out on February 1st.

16 is pretty young to have a past that you want to erase. Deanna Lambert knows what that’s like. When she was 13, her dad caught her in the backseat of a car with her brother’s 17 year old friend, and ever since, she’s been “that girl who slept with Tommy Webber.” So school is misery, and life at home isn’t much better as Deanna’s relationship with her father ground to a halt right there when he found her in the car three years before. Deanna wants to escape – not just from her school, and her home life, but from herself as others see her. This is why the book packs such an emotional punch, for what could be sadder than a young, thinking kid who feels worthless but doesn’t even really know herself yet. Sara Zarr pulls us inside Deanna’s head, and I was impressed by the truthfulness of the character’s voice and her insightful perspective.

This would be a smashing read for a teen book club, or even better, for a parent/daughter book club. It hits many big themes: how families work and how they break down, forgiveness of self and others, the wisdom and generosity of some young people set against the judgment and cruelty of others. Hey, if that’s not the real world, then I don’t know what is. I saw Juno while I was reading this book, and the film made me think immediately of Sara’s book. In both stories, smart young people trapped in the consequences of one action, find their way through towards new possibilities. Story of a Girl doesn’t suggest that starting over is possible, but moving forward inch by inch can sometimes happen.

So tune in about a week from now for my interview with Sara. She seems pretty groovy. And I’m nearly through Sweethearts so I can safely say that its every bit as rich as Story of a Girl (and with a far more delicious cover!). On Monday, Sara will be over at Kate Messner’s Blog, launching her Sweethearts- related travels around the kidslitosphere.

4 thoughts on “Story of a Girl”